Elina Mustonen: “The work of musicians and actors is largely the same deep down.”

Elina Mustonen: “The work of musicians and actors is largely the same deep down.”

Elina Mustonen has built a long and multifaceted career both in Finland and abroad as a harpsichordist, soloist, and actress. She has had significant roles in, for example, productions of Shakespeare’s plays. She has played Prospero in The Tempest and the roles of Hippolyta and Titania in A Midsummer Night’s Dream.

Elina Mustonen has created a dramatical solo piece called Her Infinite Variety – Women of Shakespeare in Word and Music together with Shakespeare scholar Nely Keinänen and director-dramaturg Johanna Freundlich. She has performed this piece for example on Broadway in New York, and in Finland. In April she will finally get to perform it in Cambridge, after having to postpone the performance due to pandemic restrictions.

You are travelling to Cambridge to perform your solo piece “Her Infinite Variety – Women of Shakespeare in Word and Music”. Could you tell a little bit about the performance?

”Her Infinite Variety – Women of Shakespeare in Word and Music” is a dramatic solo piece that brings to life Shakespeare’s texts and music from his time period in a unique way.

I perform on the stage as both an actress and a musician. I worked together with literature researcher Nely Keinänen and director Johanna Freundlich to design a cohesive dramaturgical piece. The music is performed on the virginal, which was the most popular instrument for home use in the age of Shakespeare. It was thought to be a particular suitable instrument for women.

The emotions on stage range from love and lust to hatred and from ambition and fear to humour. The catchy melodies and rhythms of the compositions reflect the many layers and the infinite variety of female destinies in Shakespeare’s texts.

The texts for the piece have been selected from Shakespeare’s Twelfth Night, Henry V, Romeo and Juliet, The Winter’s Tale, Julius Caesar, A Midsummer Night’s Dream, Macbeth, King John, Hamlet, Othello, and As You Like It. I will be playing music from the following composers: William Byrd, John Dowland, Giles Farnaby, Orlando Gibbons, Thomas Morley, Martin Peerson, and Giovanni Picchi. 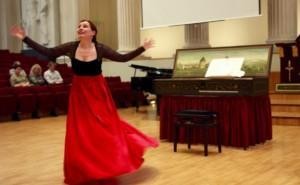 Picture from the performance of Her Infinite Variety – Women of Shakespeare in words and music. Image: Reetta Purontakanen

Where did the idea for the Shakespeare performance originally come from?

The creation of this performance was the sum of many dreams and coincidences. I had just had the opportunity to perform two great Shakespeare roles, Prospero in The Tempest and the double role of Hippolyta and Titania in A Midsummer Night’s Dream. Around the same time I managed to get a virginal I had been dreaming of for a long time and which is perfect for music from Shakespeare’s era. I had begun to toy with the idea of combining my love for these two, music and theatre, in one production. To quote Shakespeare, “Two loves I have”.

At this point Nely Keinänen, who was organising an international “Shakespeare and Scandinavia” conference at the Kingston University in London, contacted me. They were looking for programming related to the topic, and I told Nely about my idea. We decided to join forces and began planning the performance. Johanna Frendlich joined the team as a director.

Originally we created the performance in Finnish, because publishing house WSOY had recently released new Finnish translations of all of Shakespeare’s plays, made by some of the best Finnish translators.

You have said that Shakespeare is the best you know. What is it about his works that fascinates you?

The first thing that always comes to mind is the language, its richness and how expressive it is. During Shakespeare’s era almost everything in theatre had to be expressed in words. Because of this, they demand a great deal from the actors, but at the same time it gives them a vast range of tools to use. My musician’s training means that many of these means are familiar to me. I often feel I read Shakespeare’s texts like musical scores. There is an element of “detective work” in decoding them that makes them incredibly fascinating and fun. But in particular it is the language that I find incredibly inspiring.

Above all it is the humanity, realness, timelessness, and universal nature of Shakespeare’s characters that entices me. He has managed to ingeniously express what is characteristic of all of us sentient beings regardless of time, place, culture, religion, gender, race, or anything else. If this were not the case, we would not be performing his works after all this time.

Perhaps the best example of that is a comment I received from an upper secondary school student from Kuusamo (in northeastern Finland) after one of my performances “These texts talked about me.”

Are you currently working on other upcoming projects that you could tell us about?

After this piece we, Johanna Freundlich, visualist Nina Mansikka, and I, have created two new musical solo pieces called “JOUEZ! – A Tour of Molière” and “Laura Maddalena”. The former is based on Molière’s life and works and the French harpsichord music of his era. “Laura Maddalena” is a piece I commissioned from Eero Hämeenniemi. It relates the stories of two orphan girls and female musicians living in Venetian orphanages, ospedales. The piece is set in the 17th and 18th centuries. Eero [Hämeenniemi] has both written and composed the piece, and we also hear venetian music from the centuries in question during the show. An English translation of “Laura Maddalena” has recently been finished, and we hope that at some point it can also be performed in Italian.

Now we are about to begin preparing a new production together with Johanna [Freundlich] and my brother Olli Mustonen. The working title of the piece is ”Ljubimaja Olga / Rakas Olga” [Dear Olga], and it tells the story of Olga Knipper who was Anton Chekhov’s wife and muse. Johanna is in charge of the text and Olli is working on the music. The premiere is set for autumn 2023.

In addition to these works, I have also received a unique gift from Nely Keinänen. She has written me a monologue play “I, Elizabeth” which depicts the moments during the queen’s life when she was forced to make the decision of ordering Mary Stuart’s execution. Music plays a central role in this play, too. Nely’s text is in English but we will also be making a Finnish version of the play. The premiere of this piece will hopefully take place in 2024.

What all these productions, both past and future, have in common is the previously mentioned passion I have for two things: music and theatre. Even on their own they both have their challenges, but I have to admit that combining the two in one piece creates some truly unique hurdles. I have never biathlon but somehow I feel that my own artistic “biathlon” must be somehow related to it. On the other hand I feel that the work of musicians and actors is largely the same deep down. It is merely the tool or instrument that changes.