Everything goes in circles. Recently at Tate Modern with a friend, a fellow London-based-Finnish-artist, Minna Haukka we were able to point at Robert Rauschenberg’s goat, Monogram (1955-1959), and tell our daughters that both of us had seen this work of art at Moderna Museet in Stockholm when we were their age. We still remembered that one particular work of art and here we were decades later, the four of us, looking at it again. I suggested that perhaps the girls will remember this moment in time, in London in 2017 at Tate Modern, when they grow up. Walking around Rauschenberg’s exhibition was an emotional roller coaster for many reasons. Visiting a great art exhibition is always wonderful and in London we are truly spoiled with choice. I don’t know whether London is the ‘first’ or the ‘greatest’ here, but for sure is at the top of the game in the field of visual arts. Rauschenberg’s work seems more than timely and with very mixed feelings we discussed this. It is exhilarating to be an artist today trying to make sense of the world around us when things that are hard to understand happen every day. I wondered whether Rauschenberg was scared or worried or only observant when he made his Retroactive II in 1964.

From an artist point of view it is hugely interesting to see how people around the globe turn to arts to work through their reactions towards world events. They might not think that they are making art, but what else are the recent global video reactions commenting on political events or sending messages across national borders? To me they are at the heart of the art scene of today. In my opinion, Damien Hirst and Tracey Emin are the perfect artists of their times and now we have moved on from their times to today: it is no longer about being famous for 15-minutes, as Andy Warhol put it, now every(wo)man has become the artist of today through access to a wide global audience. I don’t claim to have a great theory about how we got here but I have spent a fair bit of time thinking about this through the research I have conducted over the last few years on such an ordinary object as the sketchbook. I need to backtrack a little – things do go in circles.

Sketchbooks are an ordinary tool for an artist. Others use them too to jot down their ideas, work through problems, make a note of things seen, read or heard. Sketchbooks are found in artists’ studios and in their pockets and handbags. They have no particular glamour or prestige attached to them, they are and have been used by ordinary people for many centuries. I started to research sketchbooks in 2009 as the topic of my PhD research and ended up interviewing a number of contemporary artists about their sketchbook practice. It turned out that I was constantly drawn back to questioning whether sketchbooks were as private as they had previously been presented.

Liza Kirwin from Smithsonian Archives of American Art has written that sketchbooks “afford an intimate view of an artist’s visual thinking and reveal a private world and creative process”, which sums up how sketchbooks are most often perceived. Yet I discovered artists being aware of a potential viewer looking over their shoulder and peering right into their sketchbook. I won’t bore you with the details and findings of my practice-based PhD but conclude that I have come to realise that today sketchbooks and their role can perfectly illuminate how confused we are about our private and public lives. Already in the 1970s Richard Sennett argued that the public realm has been destroyed by secularisation and industrial capitalism. According to Sennett an unbalanced personal life and empty public life had been a long time in the making while different behavioural codes are appropriate in these two realms: in the private arena sharing of feelings, self-disclosure and intimacy are acceptable, while different expectations prevail in the public setting.This confusion with private and public might have taken over our lives. For artists this is of course a rich field to explore. The reason I think that Hirst and Emin are perfect artists of their times is very simply: Hirst has made making money the centre of his practice and Emin has made personal experiences the central idea of her work. Nothing new. Could it be that things have gotten confusing and scary because we have lost the sense of public and private and are confused by our emotional reactions at the cost of rational thinking? Where are we heading to when public figures in positions of power are judged by their private actions rather than qualities that might make them fit for the job at hand? We might not have to be reminded about the prevailing uncertainties around us by Rauschenberg but it does not hurt to pause and think. Rauschenberg manages to make work that is political and beautiful at the same time. He also reminds me how lucky I am. I have been able to make choices when so many others do not have that luxury, but I still wonder how our children – those lucky ones who live in places like London spoilt with choice – perceive their childhood. Do they remember the work of art seen at Tate Modern with a good friend or do they remember something more sinister, a time when things went wrong? 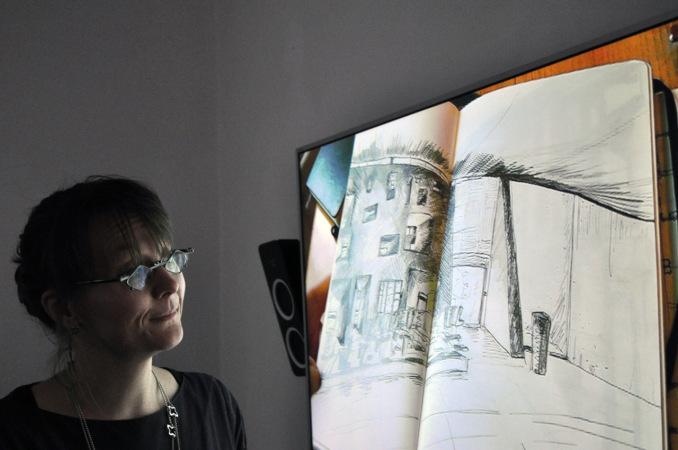 Dr Elisa Alaluusua originates from Finnish Lapland and grew up on a reindeer farm in the artic circle area. She lives and works in London. Her exhibition Sketchbooks: An Obsession is on show at Drawing Projecs UK in Trowbridge (until 4th March) and has been supported by the Finnish Institute in London. The Institute has played an important part over the years hosting a number of memorable events including Alaluusua’s first solo show in 1996 as well as an evening when she met her future husband, a fellow Finn.