How journalists use social media

How journalists use social media

If you are a journalist, social media is something you can’t really avoid using.

At work, I have talked with my colleagues for example about Twitter. We have discussed whether we should be there to promote our stories, to find ideas and interviewees. Some of us are on Twitter or Instagram, nearly all of us use Facebook. “And then there is Snapchat. I don’t understand how to use it”, we have said.

After these kinds of chats, I realised I want to do academic research about the topic: which social media platforms journalists use and what do they do there?

I had dreamed about studying and living abroad. In Finland, we have the notable Helsingin Sanomat Foundation, which allows grants for Finnish journalists to study at the top universities in the world. I applied for the University of Oxford and got accepted. Now I am doing research at the Reuters Institute, which is a part of the University. The aim of the Institute is to improve the standards of international journalism.

In my research, the main question is what kind of professional identity journalists build on social media. I have been exploring this question from three aspects:

And what have I found? Even though there are many social media platforms, journalists seem to use often one or two. Using only 1-2 platforms can be a relief for journalists: don’t try to use too many, stick with platforms that benefit your work.

“I think it is quite ambitious for an individual to think they can make four, five, six social media presences. Or if they can, that is pretty impressive.” (Journalist, UK)

For my interviewees, reasons for not using more platforms are lack of time and uncertainty how newer platforms (e.g. Snapchat) would benefit their work. Also, some interviewees mentioned that they have social media teams whose full-time job is to take care of social media.

“For me, Twitter is a part of work. And I’ll try to keep it like that. I would never tweet something like “hello, I am on holiday”. If I want to tell something about my holiday, I’ll do it on Facebook.” (Foreign correspondent, Finland)

The third aspect of this research, i.e. objectivity on social media, I find particularly interesting because as we all know, social media is a place for opinions, sometimes heated debates and social media bubbles. I wanted to know if journalists find it challenging to stay objective there.

My interviewees have very positive attitude toward this issue. They think objectivity it is not threatened on social media if you are transparent, fair to everybody and impartial.

“I was quite old when I started. I was experimental. I have been lucky for not making mistakes and I have been asked to advice other people on how to use Twitter. I think I developed rules for myself that work.” (Correspondent, UK)

“We are living on era where things are more and more transparent. It can be even more honest to tell that my attachment to this story is this and that and I am coming from this angle.” (Journalist, Finland)

The academic year will end in June. Now, I am finishing up my research. As mentioned, my main research question is what kind of professional identity journalists build on social media. Based on my interviews I suggest it is formed of four pillars.

I arrived in Oxford in September and time has been flying. I have enjoyed academic atmosphere and Oxford is such a beautiful place to live. One of the best things about this year is my fellow journalists at the Reuters Institute. In our group, there are about 20 journalists from all over the world. From them, I have learnt a lot and after this year I will miss our student life. 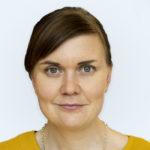 Ilona Turtola is a Finnish journalist who works for Finnish Broadcasting Company YLE. Ilona is specialised in municipal politics as well as social and health issues. Ilona holds an MA from Jyväskylä University where she majored in journalism. For the academic year 2016-2017, Ilona is doing a research about journalists and social media at the University of Oxford.