During the project the students designed and built an environmentally friendly wooden shelter called Lastu at Lusto – The Finnish Forest Museum 29 April – 7 May. 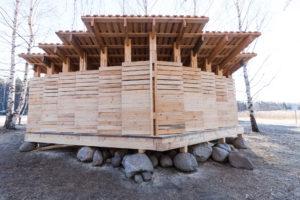 Dozen students from eight different countries arrived at the site at Lusto – The Finnish Forrest Museum in the middle of wilderness at Punkaharju 29 April. Together with Finnish architect Sami Rintala and British architect Tom Raymont they designed and built an innovative wood structure in a week. The shelter called ‘Lastu’ has a hearth and it is available for public use from 8 May onwards.

“Within a couple of days the multicultural group started working really well with wood and tools – and the result was a structure that interpreted the wilderness logically and in a bit more urban way. The most important thing was the communal aspect of people coming together around the fire.” says Sami Rintala. 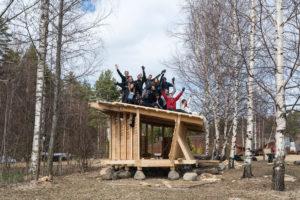 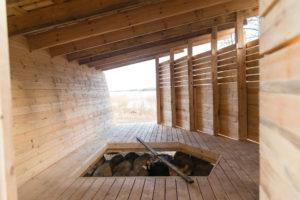 The project is an integral part of the architecture studies of the University of Westminster 2016-17. The students have already taken part in a series of lectures and workshops. In January, the Institute, in collaboration with the University of Westminster, organised a series of workshops in London where the students had the opportunity to research materials and techniques to develop the wooden shelter. The processes and the end result will be presented at the university’s graduation show in June. Lastu will also be showcased to a professional audience at the Habitare Showroom in Helsinki in September. 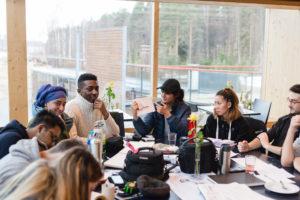 “Lastu exceeded all expectations architecturally. It fits its surroundings discreetly while affording new angles on the lake and landscape. Only when observed little closer, you can notice its surprising and innovative architectural solutions,” says Pauliina Ståhlberg, director of the Finnish Institute in London.

Lastu is part of the largest ever, collaborative project between the Finnish institute’s in Paris, Berlin and Benelux Countries, Mobile Home 2017. It is part of the Finland 100 programme celebrating the centenary of Finland’s independence 2017.

WATCH THE TIMELAPSE OF THE BUILDING PROCESS HERE