Lähtö / Départ is the latest production of visual theatre & circus company WHS. Directed by magician and visual artist Kalle Nio, the performance brings to the stage a couple that has drifted apart from each other and is now floating in the middle of dreamlike imagery and illusions.

The piece will provide a unique theatre experience in which circus, magic, dance, clothing design and visual arts merge. It is enhanced by large-scale video projections, as twisted black and white cinema style and cinematic tricks and effects flow from the screen on to the stage. The furniture on the stage turns into constructions that challenge the laws of gravity, creating a space of instability where the couple tries to resolve their feelings. Everything is in constant state of transformation.

The piece borrows its themes from the intense depictions of Michelangelo Antonioni’s films. The absurdness and miscommunication in relationships is brought into focus, as the performers communicate through the transformations of the clothing and the objects. The dreamlike, twisted soundscape of the piece is created by composer Samuli Kosminen.

Experience the piece at London Mime Festival between 10 – 13 January!

Lähtö / Départ has been supported by the Finnish Institute in London’s TelepART funding programme. 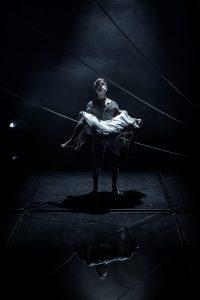