The Finnish Institute in London launches The Finnish Village at the The Lakes International Comic Art Festival held in Kendal, Cumbria

The festival, which will take place 13–15 October, brings some of the biggest international names in comic art to Cumbria.

The Finnish Village opening will be on Saturday 14 October at the Arts & Media Campus of Kendal College. At the Village, an exhibition of contemporary Finnish comics will be on display, including works of renowned Finnish comic artists Johanna Rojola, Petteri Tikkanen and Emmi Valve. In addition to the three aforementioned artists, Tuula Karjalainen, the author of the biography of Tove Jansson and Sophia Jansson, the Artistic Director of Oy Moomins Characters Ltd, will also attend the celebrations over the festival weekend. One of the most quirky elements of the Village will be a Finnish sauna, combined with arts and events.

At the festival, The Finnish Institute in London will also exhibit Tove Jansson: Tales from the Nordic Archipelago photography collection, which has previously been displayed at the ICA (The Institute of Contemporary Arts) in London. In addition, two documentaries on the life of Tove Jansson and a full-length Moomin animation will be screened at the festival.

Archipelagogo, an exhibition commemorating the life and work of Tove Jansson, will also be seen at the festival. Archipelagogo is a fantasy world of islands and their residents, created by British artists Jonathan Edwards and Louise Evans. The exhibition combines sound, visual arts and 3D modeling to create a distinctive, imaginative world of its own.

“I am proud of our collaboration with the The Lakes International Comic Art Festival, because it enables us to promote contemporary Finnish comic art in an international arena. Finland is known, amongst other things, for the relatively high number of female comic artists, as well as for the fact that Finland is the third largest comic-reading nation per capita in the world”, says Pauliina Ståhlberg, the Director of the Finnish Institute in London.

This year, one of the headliners of the festival will be Spanish-born Sergio Aragonés, who is perhaps best known for his work on the MAD Magazine. At this year’s festival, he will also be announcing the first ever recipient of The Sergio Aragonés International Award for Excellence in Comic Art. 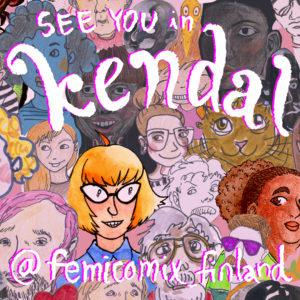