Finnish books donated to libraries in Dublin and Belfast

Finnish books donated to libraries in Dublin and Belfast

Our well-received library donation campaign 10 x 10 Stories from Finland has reached another island as books were donated at Dublin Central Library on 7 November and at Belfast Central Library on 8 November. The donation in Dublin extended the campaign to the Republic of Ireland, the Central Library being the first library outside the UK to receive our books.

In Dublin, we delivered the books in cooperation with the Finnish Embassy in Ireland. The books were granted a beautifully decorated special display area, where they were accompanied by other Finnish books already stocked by the library.

In Northern Ireland, the books were kindly received by the Belfast Central Library, but the books will not bring joy only to the book enthusiasts of Belfast. The books will be circulated around different libraries, making them available for readers all around Northern Ireland – where public library use has actually increased in recent years. 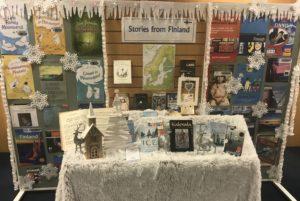 The display of Finnish books at Dublin Central Library.

Jaakko Nousiainen, the head of the Arts & Culture programme, had the honour to deliver the books. “It has been a pleasure to celebrate literacy through this campaign. The books have been warmly welcomed in libraries around the UK, and I am very happy that we are now able to include Ireland in the campaign as well. I hope the national epic Kalevala and other Finnish stories will be discovered by many readers”, Nousiainen commented.

Overall, 100 books have now been donated through the campaign during 2017, and only one last library is still due to receive the books. The donation at Norwich Millennium Library will take place on 28 November.

Our partners in this campaign are Embassy of Finland in London, Bloodaxe Books, Gecko Press, Orenda Books, Pikku Publishing, Serpent’s Tail, Sort of Books and Vagabond Voices. 10×10 Stories of Finland is a part of the official programme of Finland 100. 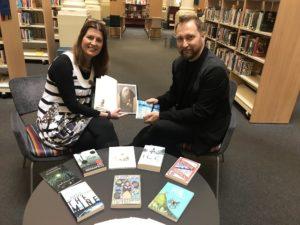 The books for Northern Ireland were received by Brid Steele from the Belfast Central Library.